AG has only rarely put out redheads with a really nice shade of red hair, and this is one of them!

I named her Pippa and came up with an elaborate backstory for her that is probably only interesting to me, so I’ll spare you it, but you might be interested to know she’s a time traveler! 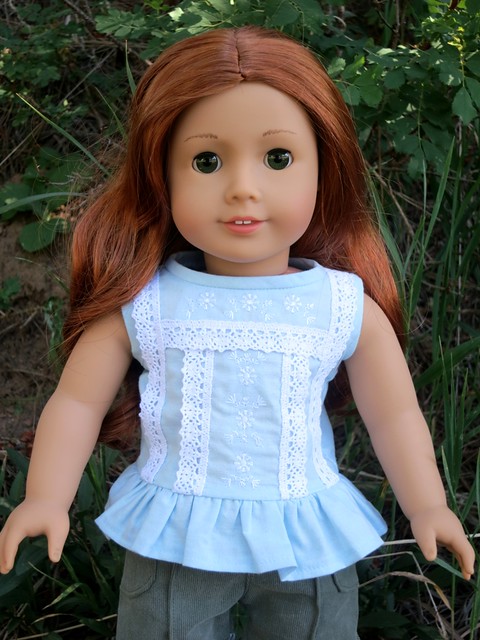 Get the free pattern for the lace peplum blouse here

Yes!  There’s a link to the machine embroidery file  in pattern – for personal use only, not to put on things to sell.

How did this happen?  It’s the end of the week already?  Eek!  Time got away from me.  Wishing everyone a happy and safe 4th of July!

Sadly, this will be the last week of the summer sew-along,  (Get your photos in by tonight! The final pattern goes out tomorrow!) but happily, about 60 people participated and their dollies have a bunch of new outfits to wear for the summer!  I hope you all had as much fun as I did!  “Crowd-sourcing” gave everyone way more inspiration than what I alone could have come up with, so thank you to everyone who’s been participating!  See all their pix and get inspired here: https://www.flickr.com/groups/summersewalong/

With any luck, because of the sew-along you’re “in the groove” with sewing and don’t want to stop!  Don’t worry, the sewing fun won’t stop anytime soon…I have two posts finished and scheduled for the next two weeks, they’ll be automatically posted on the next two Fridays while I stay away from the computer to work on another project.  What project is that?  It’s huge…and just what you said you want.  More shoes, more accessories and some historical stuff from a period I haven’t covered yet.  Here’s a teaser: 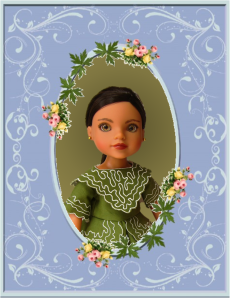 For this week, here’s a tutorial on how to do easy Madeira appliqué that you can use on anything, for example, to make an heirloom version of this week’s sew-along dress  pictured below. 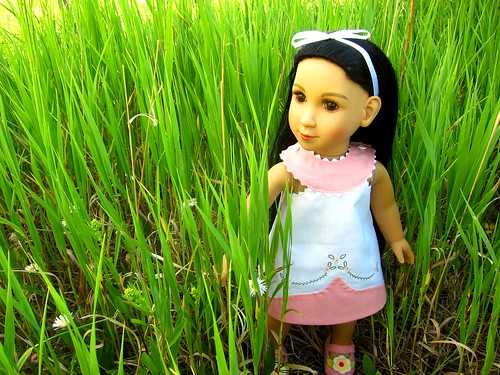 Get the 5×7  embroidery design in .pes format free here:

And finally, can any Sasha experts help me out? 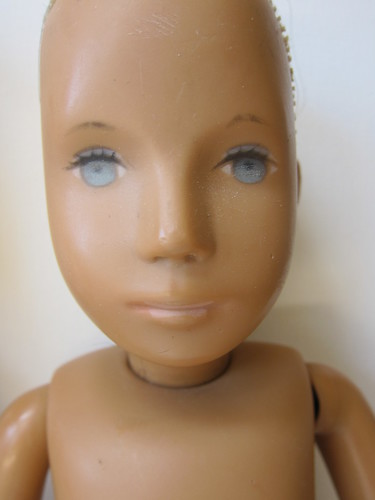 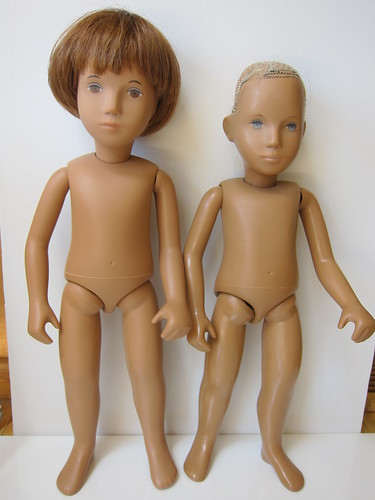 The girl on the right is named “sewing-room Sasha” because she lives there to help me with fitting. Mainly because she’s in poor condition and can’t be damaged much more by pins and such.  The other day I tried something on her that I had just made, and it was quite a bit looser than I’d expected.  I realized she is much smaller than my other three Sashas, whom I bought with tags and in their boxes and know are all 1970s Trendons.  The one on the left was a Gregor who came in a navy blue sweater and jeans – he turned into a Sasha when most of his hair fell out.

“Sewing-room Sasha” was purchased cheaply at a doll sale, and had been sadly used and abused. The originally blonde hair had been “dyed” with what appeared to be black shoe polish, and was dried to a stiff, disgusting mass. Smears of it were all over her head, neck, and shoulders too.  She was dressed in clothing that I knew was actual Sasha stuff, but was probably not original to her, including ankle strap leather shoes, and the same sweater that my (1970s) Caleb came in.  Her strings will be of no help, since she was restrung with sewing elastic at some point, and then DH had to restring her again when she came to live here.  Does anyone have a guess about her origins?  Thanks!

(and yes, obviously an ADORABLE new dress is in the works for Sasha, probably for back to school, hence the fitting difficulties!) 🙂