The final post for 2019 is here! Appropriately timed too, since we’re about to get a lot of snow tomorrow 🙂

This dress came from the Winter Dress Contest entry by Noel Devine – see her original sketch in the pattern here. Doll is Our Generation Meagan available here: https://www.target.com/p/our-generation-doll-with-pet-golden-retriever/-/A-76150961

The tutorial details how to use cricut holographic film to create snowflake designs like I did, but note that even though I followed the package instructions to the letter, a couple of the snowflakes started peeling off at the edges a few hours later. ☹ I’d probably use freezer paper stencils and fabric paint if I were doing it over again, even though the sparkle effect is so cute.

A while back, Brenda sent me this adorable pic:

She used the machine smocking designs from this collection.  If you don’t have an embroidery machine, you can use the guidelines in today’s tutorial to smock by hand if you know how, or there are mock-smocking directions in this pattern which, incidentally, will also provide you with a sloper to use for drafting your own version for whatever size doll you’d like

Get the smocked dress tutorial here

Have you heard the term “grail” doll?  Mamachapp Moko-chan, specifically this pigtail one, was one of my grail dolls and eventually did arrive and then got hidden to be a present for some special occasion. I found her while cleaning the doll room because DH is apparently not a good hider of dolls 😉  He is good at taking pix of them though, as you can see from Moko-chan’s first photo shoot: https://www.flickr.com/photos/67465307@N08/albums/72157697316555690

I recently got another version of Moko-chan, who came in a kimono.  You might recall from some previous posts the difference between kimono and yukata, but to avoid linking here, I’ll mention one main difference, which is lining.

Many tiny doll clothes sell for exorbitant prices, and Azone/Obitsu are some of the higher-end ones of these. You can get this 21cm Obitsu body for around $20, and maybe another $20for a head with rooted hair, so what you’re really paying the high price for with the Mamachapps is basically the eyes, styling of hair, and clothing.  The pictures of this doll in her promotional photos made it look like she was wearing a lined kimono, so I was startled to take it off and find out that it was not only unlined, but the seams weren’t even finished on the inside!  I did love the effect of the fake “lining” though, for a couple of reasons.  First, it’s definitely easier and takes less fabric than lining the whole garment, and secondly, it avoids the dreaded“bulk” I’m always going on about with doll clothes.  Something I found very interesting though,and wouldn’t have come up with on my own is using fabric on the BIAS for this purpose.  This is a great idea that really improves the drape of the pieces, especially the lining for the body itself, helping it to curve nicely around the body rather than sticking out stiffly.  Fabrics cut on the bias don’t fray the same way as those cut on the straight grain, so I can even before giving of the sleeve “lining,” although I still would have preferred it to be at least pinked.

Of course, I needed to make a kimono for my original Moko-chan too, so the pattern here is based on the one her sister came with.  It fits an Obitsu 21-23cm body or anyone else with similar measurements such as Dal, Tiny Betsy (shorten arms and bottom hem), or even Licca and Blythe bodies. Don’t have any of those?  The tutorial for fake lining can be used with any yukata/kimono pattern on the blog but is probably most useful for the small doll ones like Ten Ping or Little Darling.

Get the tutorial here

There are more kimono patterns to use with this “lining” technique here:

Hello everyone! Here’s my first post from Japan! We are living in Mie prefecture with the Hasegawa family while mom helps them get certified as an organic tea farm. Just like our family, the Hasegawas also have two daughters near the ages of my sister Della and I and also one older brother. Tomorrow I’ll be starting school with Yuki. She writes it like this: 雪 isn’t that pretty? Maybe I’ll learn a new way to write my name too?
Love, Bex

BTW Here’s a pic of me in my new uniform: 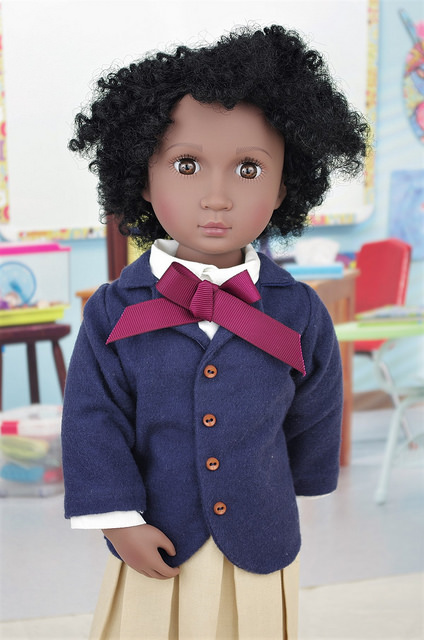 Get the jacket pattern here

Skirt shown is from this costume, although I plan to make it again in plaid.

The problem with the Animators is that once you buy one, you can’t stop!  This is Elena, who seems to have a less cartoon-y face than Lilo, but an adorable expression with one slightly lifted eyebrow.  My Elena came in a cute dress whose cut reminded me of some traditional Mexican dance dresses.  They have very full skirts with ruffles along the bottom and watching a group of dancers twirl so the colorful, ribbon-covered skirts billow out is a beautiful sight!  Children’s dresses are often less complicated than adults’, with a simpler top that looks similar to this one.  The construction of the “real thing” would probably use elastic at the top for more ease of movement,  (for example, Simplicity 3863) but I avoid it on doll clothes whenever possible because a) it will eventually stretch out and all your hard work will be wasted and b) dolls generally don’t need much ease for movement added to their clothes unless maybe they’re the Raggedy Ann dolls from the Johnny Gruelle books that “come to life” and run around having adventures as soon as people are gone.  😉

Here is a quick tutorial on drafting a circle skirt for any size doll, and another animator pattern for a bodice/top similar in cut to the one Elena comes in.  Enjoy!

I’m hoping to be back with a new set of historical patterns in time for Esty’s Labor Day sale – fingers crossed!

“This is Scrump.  I made her!  But her head is too big, so I pretend a bug laid eggs in her ear and she’s upset because she only has a few more days to…” (From the Lilo and Stitch movie – here’s a youtube link to the scene)  I had not seen the movie until recently and found it pretty cute…and then of course the animator Lilo doll had to come live with us!  🙂

Does your Lilo need a Scrump?  The one she comes with is fine for a child to play with, but an adult collector might prefer something a little more detailed to display with her.  Lilo says she made hers in the movie, but this pattern is a challenge, even for an adult at such a tiny scale, so don’t attempt it unless you have experience making tiny plushies and some patience!

I was too busy cleaning today to get the rest of the pix for this post up, but I found an adorable cross stitch pattern on the Disney Family site:  https://family.disney.com/wp-content/uploads/2016/07/Disney-Family_Lilo_Stitch_Cross-Stitch-Pattern.pdf  and put Stitch’s head onto a T-shirt for Lilo using last week’s dress pattern.  It’s super cute…and will hopefully appear next week!

Reminder: Today is the last day to get your entries in for last week’s Ramble costume and the boot pattern will be emailed tomorrow.  Scroll to the bottom of this post for the links!

Oh my goodness…you did SUCH a nice job on the last two weeks of costumes! 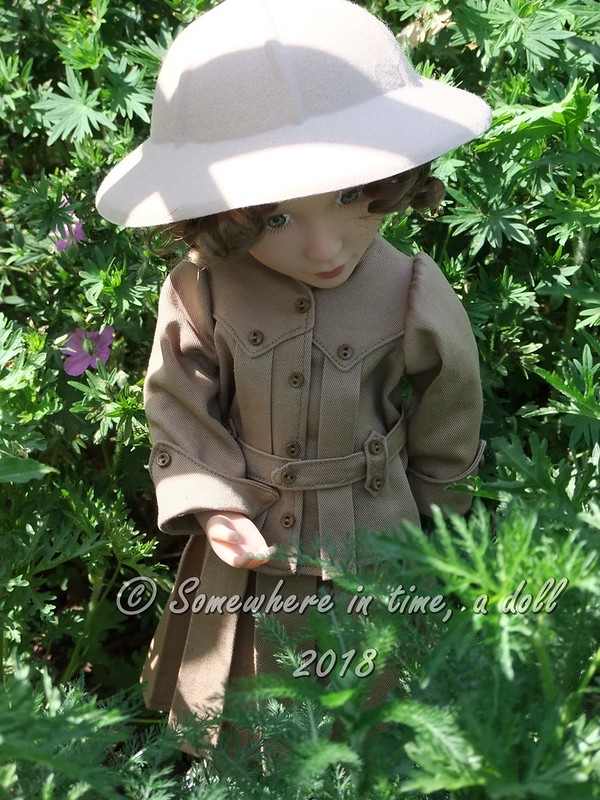 The safari hat is just perfect!  This is by Juliette Auckland 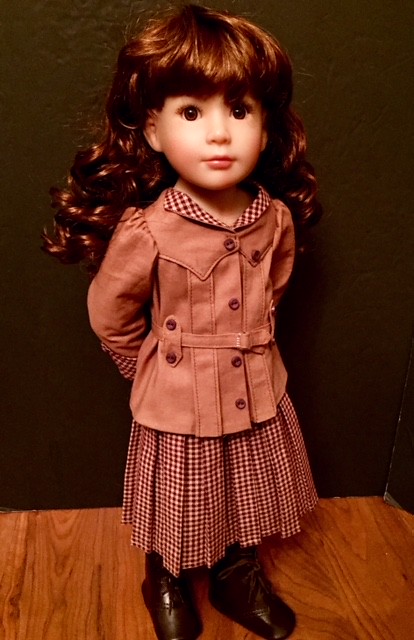 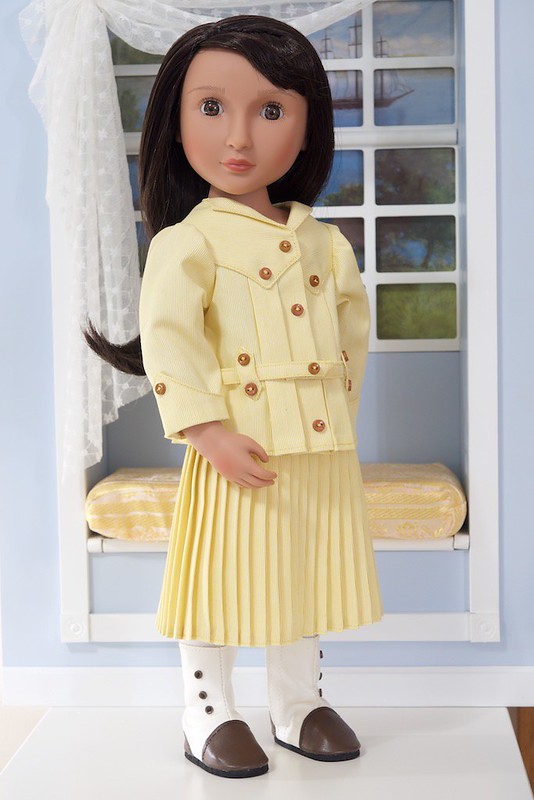 Check out the amazing pleats on the skirt here by slpslee

It seems to have resized just fine for smaller dolls too: 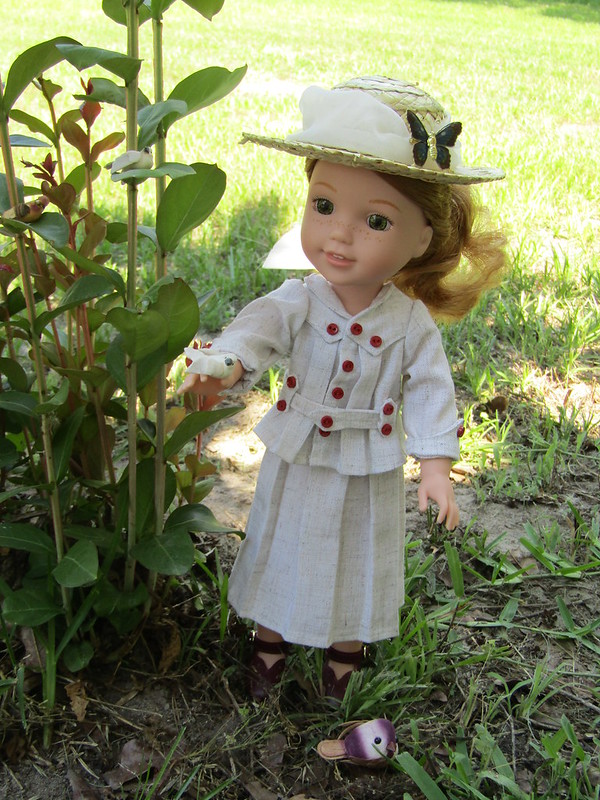 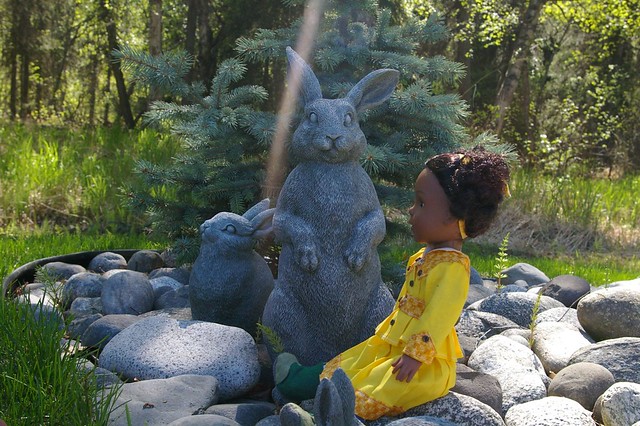 There were so many beautiful things from the first week too: 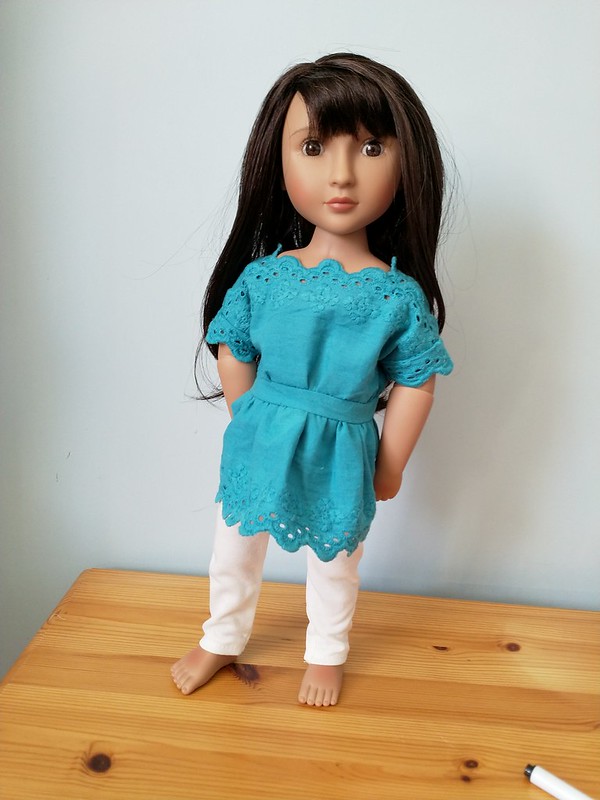 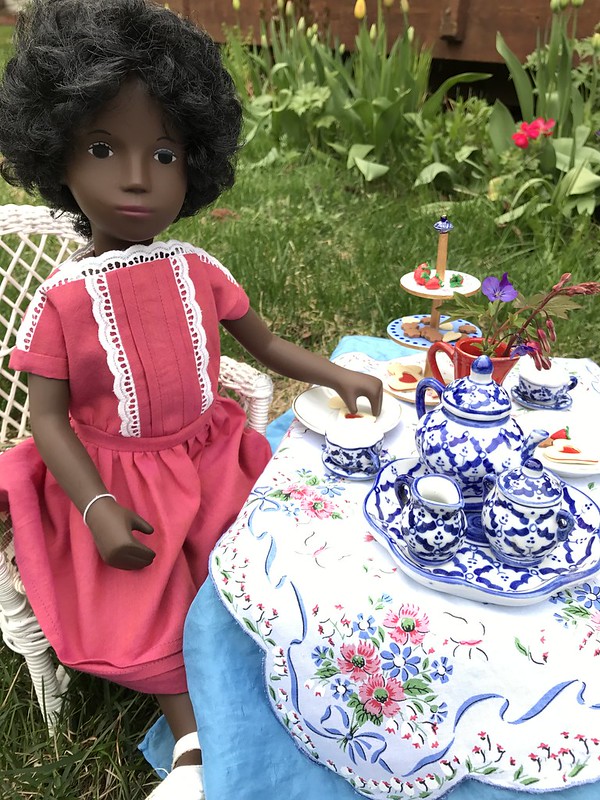 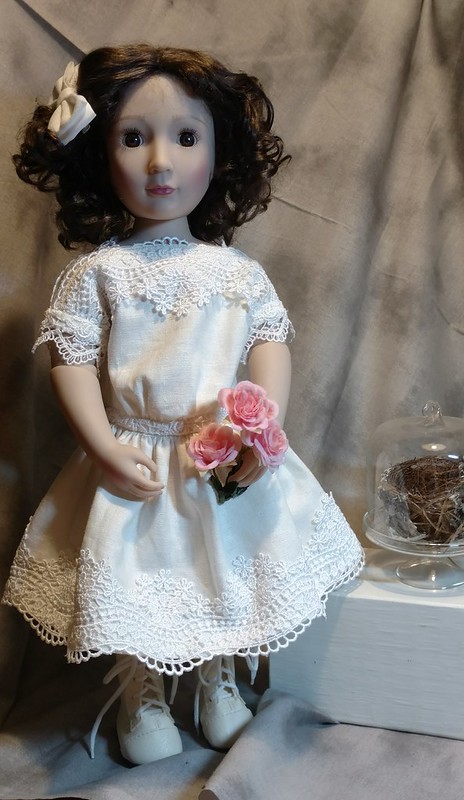 and beautiful lace on this one by catknapp

This week is an Edwardian Seaside Costume!

After last week’s challenge, you’ll be happy to know this one is pretty quick and easy!  I had every intention of taking the dolls to what passes for a “seaside” here in Colorado, but long story short, it didn’t happen.  I know lots of beaches near the actual oceans are rocky, so maybe we can imagine they’re not in my backyard, they’re climbing on rocks to get down to the water?  🙂 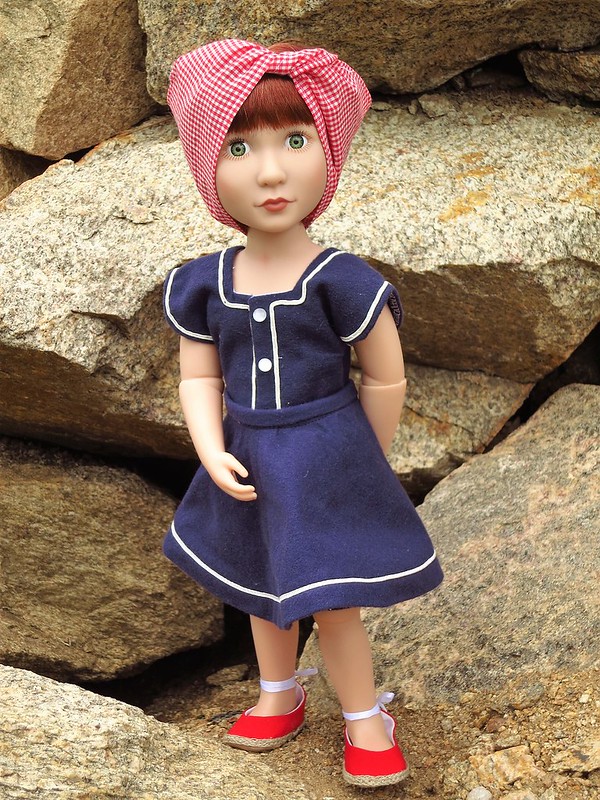 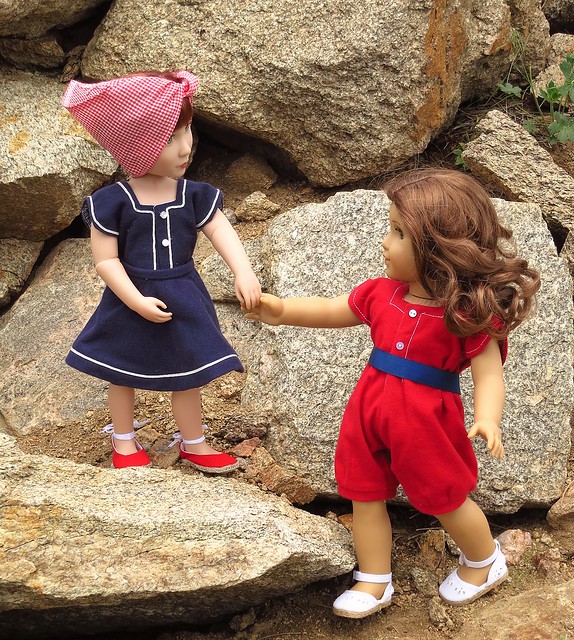 Get the pattern here today only

The resized ramble from last week is not quite ready for AG size yet…next week for sure!

If you want more info about the sew-along in general, please check the first week’s post.

To participate in the sew-along: