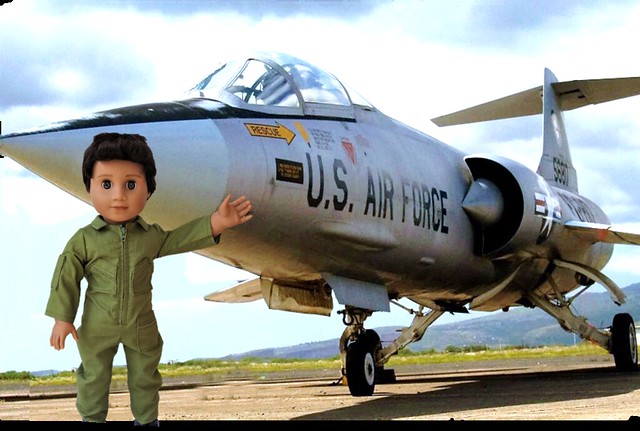 Just like you might have done, I also lined up outside the AG store before they opened on Jan 1st!  The original plan was to get Luciana, and, like, all her stuff 😉 but instead I ended up with…a boy doll!  Longtime followers know that boys had a major part in the blog at the beginning when I was smitten with the Kidz n Cats, and Sasha’s Gregor and Caleb have appeared from time to time too.  The opportunity to do more with boy dolls was compelling, and instead of Luciana, I ended up with the doll you see above, who has a couple of names/themes right now I’m trying to decide between.

I had actually made the coveralls you see him wearing for Luciana before I saw them in person, inspired by pix people had leaked of her flight suit, but lacking the right color zipper to make a blue one.  When I finally saw it, I liked mine better, even though it was challenging to make.  The AG flight suit just has fake stitching to simulate pockets and iron-on prints for patches.  It seems like quality is going downhill lately, with terribly cheap shoes on the truly me dolls and a much cheaper body.

When I put the coveralls on the new boy, DH said he looked just like an air force pilot, so I put him into a pic to make it more realistic.

Get the pattern and photoshopping without photoshop tutorial here!

Yes, this pattern is kind of challenging, especially if you’re doing real pockets.

Looking for something similar but easier?

Here are some more of my free patterns that are perfect for AG boys:

This site uses Akismet to reduce spam. Learn how your comment data is processed.