Today is the winter solstice and the end of our retro Christmas series! 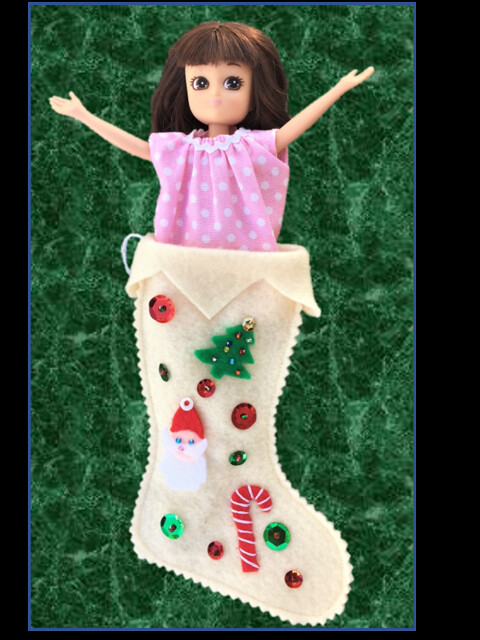 The last installment of the 1950s Christmas pattern was supposed to be a sock doll and dress.  I debated for a while about the sock doll – it certainly seems possible to cut up a doll sock and turn it into a doll’s sock doll, but good ones are hard to come by and I hated to sacrifice a good doll sock.  It also meant asking you to hunt down the same one I had and cut it up, all to make a doll that, honestly, I just don’t find to be that cute.

Instead, I made a pattern for a dress similar to the one the sock doll is wearing and you can put on a doll for your doll, like a Lottie and probably a mini AG/OG although I’m too tired to go hunt one of those down to check at the moment!  Those dolls will fit in the stocking from last week, and in case you’ve missed them, here are all the other retro Christmas pattern links:

Back next year with lots more doll fun!

This week we have the “sock” from our “sock full of gifts” series.  There was a version of this stocking for dad too that had a stocking decorated with a pipe and cigarette, which might have been period correct, but seems really strange and unrelated to Christmas.  Since I don’t have a doll fireplace, I attached a loop and hung mine on my tree.   Although one original hope of this series was to give you a craft to do with a child, the pieces for this are really small and even I found it challenging to get the tiny felt pieces to look nice.  There are some suggestions to make it easier in the pattern.

I forgot to share this version of Nanea’s jammies by firstladycpm:

They have an authentic drop seat and pocket, how cute is that? (click to see more pix)

I also haven’t yet reviewed the 15″ Big Lots dolls that Janet told me about in October!  Sad to have a backlog of stuff to do for the blog, but that’s one of the things on the list.

In case you’re wondering, yes, I got one and the bodies are pretty much identical to the Wellies in terms of measurements, although the jointing is a little different at the hips so they don’t look exactly the same when standing.  For $15 the price:quality ratio is good and they currently come in 3 different versions, making them a nice, inexpensive alternative to the Wellies!

In other news, it’s only 18 days now until the release of the next GOTY, which could be good or bad.  Jan 1 may not the best time to be considering an expensive doll purchase because Santa may have just brought you one and you will feel guilty getting a new one OR won’t appreciate the one from Santa.  Oh yeah, and you’re out of cash after buying all those other presents!

Of course, if what Santa brought you was an AG gift card…there are some really cool pix floating around the internet of Luciana, should you be inclined to spoil surprises for yourself  by doing searches for her dog or habitat.  🙂  The clothes I’ve seen so far though are kind of uninspiring.  Luciana is in some ways very much like the girl I was at that age!  In addition to dolls, I was super into space and computers (my Apple IIe!) and LOVED a magazine/TV show called 3-2-1 contact.  It kind of feels like the space program was different back then and maybe made more accessible/interesting to the public by the media than it is now.  It’s SO great to have a science-themed GOTY I just might have to get her, even though I already have a Truly Me who looks almost the same… 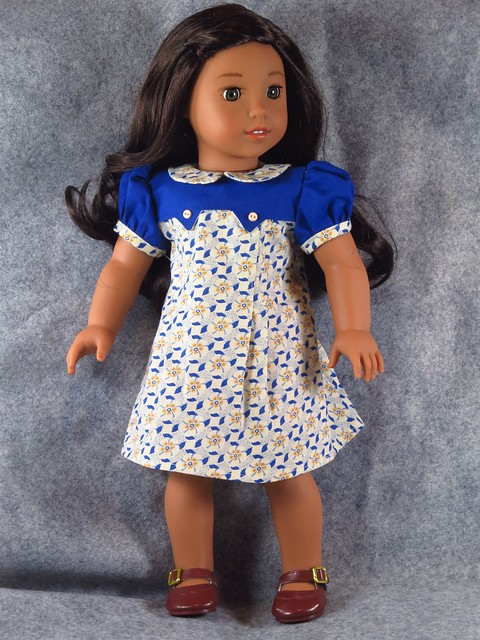 Today is Pearl Harbor Remembrance Day.  Although Nanea’s book was not super engaging for me as an adult, the event did play an important part in her life, and marked the beginning of WWII for the US.  See more here from history.com

This pattern is actually from 1944, which is a little late for Nanea’s time, but similar versions of what makes it unique (the pointy yoke) can be found in commercial patterns from both earlier and later.  This one seems to only have been available in sizes for toddlers.  That’s not necessarily a bad thing, because I feel AG bodies are very well suited to those styles, but if you want to make something similar for a smaller size doll, check out this post which has something similar but a little easier for Sasha and Hearts for Hearts sizes.