OK, green was not necessarily a 1950s color, but after making all the other things in pink and blue, I needed a change.  When I went to take the pix, I noticed it was “green and white” outside too, thanks to a snowstorm falling on the just-beginning-to-emerge grass.

The outfit for this week is a blouse/pants combo that looks perfect and vintage on Toni.  Girls in the 1950s might have worn this as play clothes or maybe for gardening or some other task, but it wouldn’t have been appropriate for, say, school.  On a modern doll like my Della, it seems to hint “vintage” in a really sweet way.  This would be an adorable outfit for a young child too!

There are a number of new things on the flickr page, and here are some cute ones from the recent 1950s patterns, just in case you need more inspiration to get you sewing them: 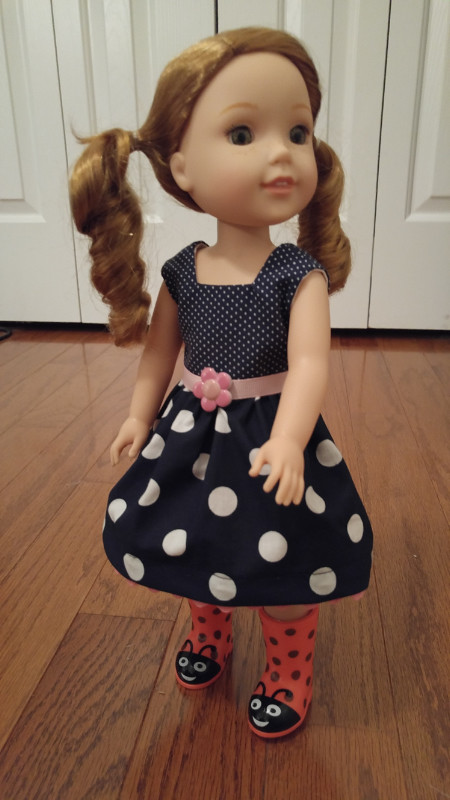 Willa in a “double dots” dress by Nonniebelle07 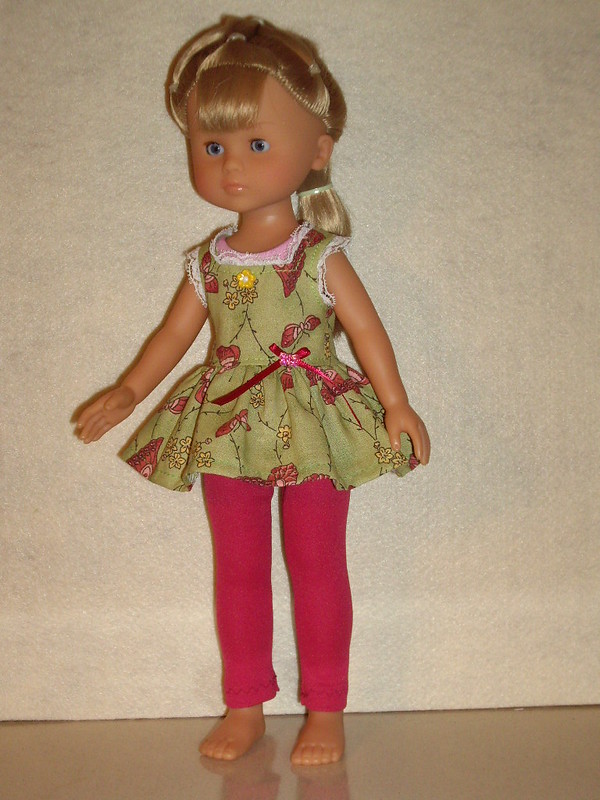 Great idea by Karen to shorten this for use with leggings 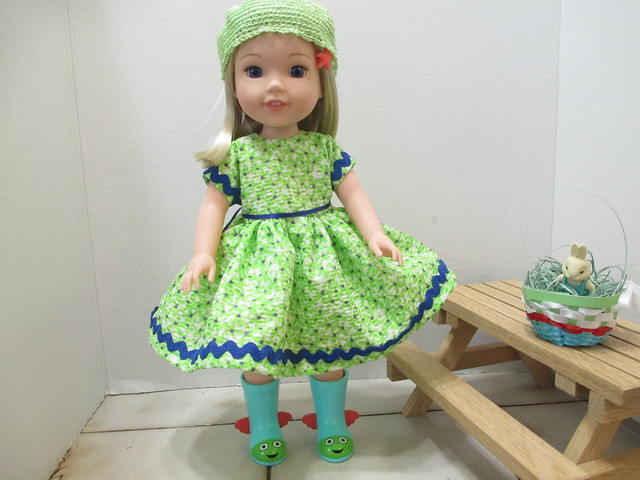 How did I never realize Camille’s boots have little fins?  They are too cute and a great match for gammerangel’s sweet seersucker dress!

And this gingham dress by Marge makes me feel like Camille just kicked off her boots to run through the grass to a picnic!

For this week, we have another easy-to-sew mid-century dress that’s equally adorable on vintage or modern dolls.  You’ll notice this skirt is MUCH wider than last week’s.  Skirts in the 1950s were very wide, but it can be hard to gather enough fabric onto a smaller bodice to get that look.  Poly-cotton blend gingham is usually on the thin side, which meant more of it could be used than if I’d chosen a heavier-weight fabric.  A puffy petticoat can hold it out to Toni’s width, or you can let it hang naturally like Emiko’s for a less fussy look. 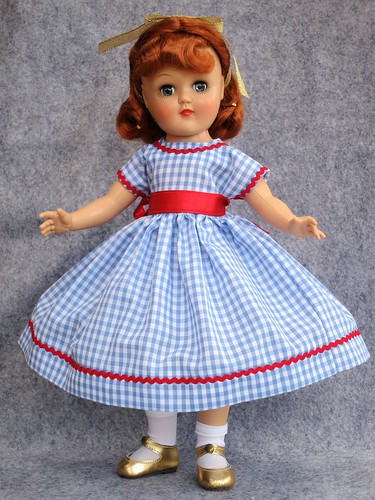 In case you’re wondering, yes, I was going for a vaguely “Dorothy” look on Toni with the shiny shoes 🙂 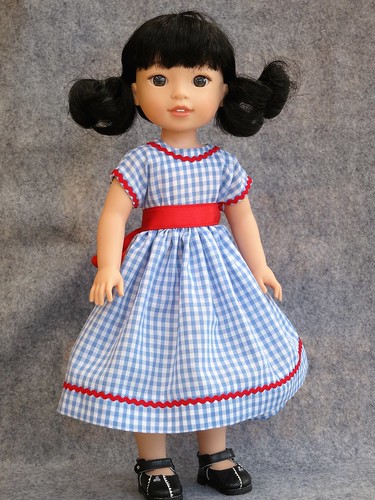 If you post pix, it tells me you are enjoying the 1950s series and more things will keep appearing!  I spent last weekend on some 50s craft projects that your dolls might like and am also working on some larger size outfits too!

They don’t even need to be 1950s-inspired.  Check out the princess dress with clever crown from gammerangel: 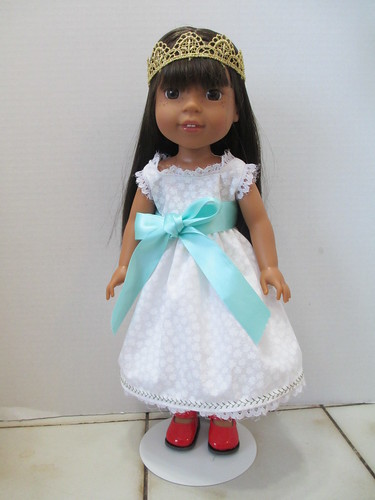 Yep.  Well, some of the SuperTargets anyway, as my husband noticed, which led to a “Awesome Husband” award last weekend.  I’ve had a rough couple of weeks and was super stressed out about work and DH wanted to go hiking and get my mind off things.  When he opened my car door, look who was waiting for a hug: 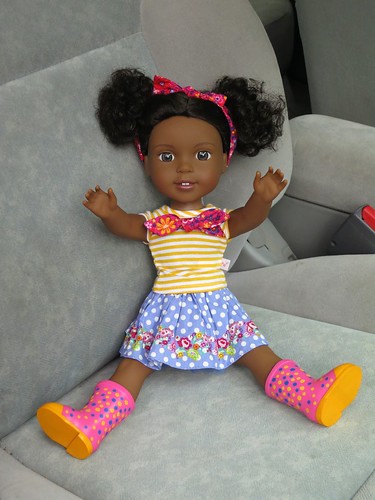 It’s the Wellie Wisher Kendall, whom I’m calling “Della” for short.  Apparently she’s the crafty/DIY gal of the group which he thought was a good fit for my personality.  It seems almost unreasonable that I’d like her so much – she’s just a piece of plastic, right?  But I can’t stop smiling every time I see her!  Receiving her this way made her a symbol that my husband acknowledged I was super stressed, and went out of his way to do something that would  make me smile. ❤

You might remember a few weeks ago, I posted a link to an article about bias in film toward an “idealized” beauty of the 1950s.  Kodak skewed their color film to bias a blue-eyed blonde with red lips and an overall cool tone to her coloring.  But it wasn’t just the coloring that epitomized the era; I’ve written before about how doll bodies conform to the fashion sensibilities of their times, like Patsy with her roly-poly body that looked great in sweet little 1930s bishop-style dresses. Likewise, 1960s Barbie’s outrageously strange proportions have morphed into Lammily in our times.

You can see first of all here, their body shapes are very different, even though their bust/waist measurements are almost the same.  Emiko’s torso is flattened out, whereas Toni’s is cylindrical.  The same dress can be made to fit both, but ends up looking very different!  See both in the same dress here and here or in the pattern below.

It’s also interesting to note that Toni looks quite “made up” with a fussier hairstyle, heavy lipstick and blush, and even some eye shadow, whereas Emiko’s coloring is more natural, yet both dolls are beautiful reflections of their own time.

I’ve been on a vintage sewing spree lately for 18″ dolls (more to come on that soon), and decided to also sew for Toni, using vintage Butterick 7973, supposedly sized for her.  (image below from Pinterest)

Well, I bought the original 14″ version, but it didn’t really fit too well, and since I was altering it anyway, I thought it would be fun to see if I could make the same pattern look nice on both body shapes.  It took more adjusting than I had anticipated, but so far it’s going well!  Toni’s body lends itself to darts, which were a major feature of 1950s bodices at the waistlines, even for little children who didn’t really need them.  Those same darts made the dress quite ill-fitting on the Wellie body.

The pattern was re-released a few years ago, as Butterick #5865 without any indication of who it would fit, and I posted some pix on flickr of one dress I made on a variety of dolls, noting that it seemed to fit the Journey Girls the best.  It’s also a reminder that my photography skills have improved a lot since 2013, because the pictures are not that great! 🙂

Anyway, I’m hoping to do a little sew-along of 1950s styles to fit 14″ dolls and hope you’ll join in!  They are quite easy to sew, and a great place to show off your small bits of vintage fabric and trims!

Speaking of the flickr page, I LOVE seeing what you’ve made with my patterns, and even though I’m on yet another historical bent, it’s nice to showcase sewing for our modern dolls that reflects modern interests and different cultures.  Check out what Lisa did with clever use of prints that mimics embroidery on the kamiz: 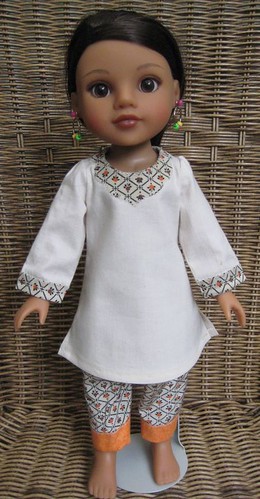 And Carol shows us that Little Darling’s Karate Gi will fit the Wellies too: 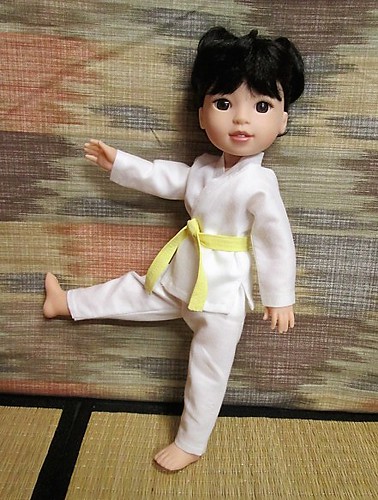