Wow, the summer sew-along vote was very close!  The whole week long, I kept checking and it hovered around 50% for both options.  Eventually, near the end, someone must have mobilized some friends to vote for the smaller dolls and they ended up winning.  Then I realized…oops!  There were comments enabled!  I totally did not intend to do that as part of the survey, but ended up being glad I did and carefully reading all the opinions.  This blog actually started with me sharing patterns of things I was making for my Kidz n Cats since there was nothing out there for them at the time.  More and more AG size stuff got added due to requests, but thank you to those that reminded me there are already a TON of patterns out there for the 18” dolls, while our poor little ones get neglected.

The summer sew-along will most likely be the whole month of June, and focus on Paola Reina’s Las Amigas.  I especially like the Paola Reinas because they’re made in Europe, and if you watch their video on youtube, it shows their factory roof is covered in solar panels.  Makes me feel less guilty buying things that might be a little more responsibly manufactured than some of the things made in China!  If you don’t have those, the patterns will also fit Bleuette, Corolle Cheries, Little Darlings, etc. and I’ll have some resizing instructions too!

At least the first dress pattern will also be sized for April, just to make sure you have something to sew for your “big girls” that month 😉

Speaking of April, her journal is only partially ready, but she got a sewing machine for her birthday.  The OG sewing set comes with a cute little pattern envelope and a simple A-line dress pattern sized for 18″ OGs.  The first thing she made was a very basic little…

If you’re wondering, yes, it will fit all the dolls shown below! 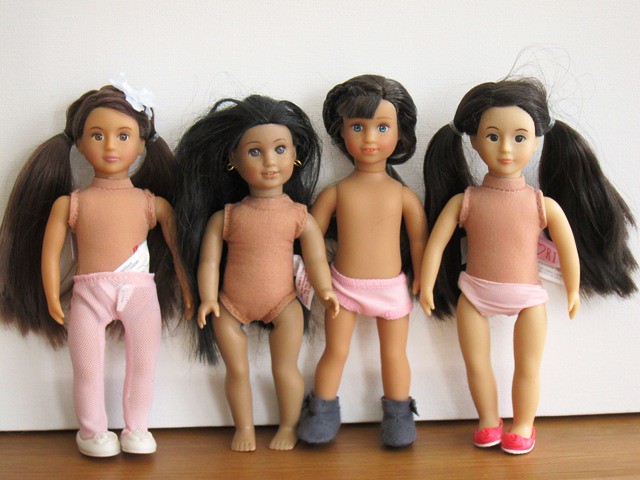 I had every intention of turning this into a contest, since it’s hard to beat an A-line dress as a blank canvas.  Then I thought about having to pick a winner and come up with a prize and how many IEPs I have to finish before the end of the school year and…yeah.  If you’d like to be super creative with your dress and post it here: https://www.flickr.com/groups/2825314@N20/ I’m sure everyone would LOVE to see it!

One of my New Year’s resolutions was to not feel guilty if I don’t post something every week on the blog.  While I have skipped weeks here and there, I seem to not be able to not feel guilty.  😦  I had SO many ideas and plans at the beginning of the whole “April thing” and then I feel terrible when they stay stuck in my head instead of appearing here.  Then there’s the whole journal, which takes away from sewing time, and with the “return” of her friend Abril, who has a really awesome weaving-related story (also still stuck in my head) I’ve been weaving up a storm, including some huipil panels:

and also learned to do this strange sort of stretchable needle-knotting that accidentally turned into a very cute hat for Ten Ping:

If only she had a sweater to match! Hmmm…

The tutorial for this fun little hat should be ready soon.  Don’t have a tiny doll?  Turn it upside down and add a strap – it’s a purse for a larger doll!  To prepare, you’ll need to make yourself a big wooden needle, and after some experiments and failures, it appears that gauge might be somewhat important.  My needle was from a 5mm dowel (that’s just under 1/4″) and roughly 3″ long.  The point should be only as sharp as a knitting needle and the hole you drill in it should accommodate worsted-weight yarn easily.  Sand and finish it satiny-smooth.

If someone in your house is obsessed with knots, you can get started now – this is ABK #3542/3544.  If that someone doesn’t have the ABK , either they’re not truly obsessed or I just told you what they want for their next birthday!  🙂

This site uses Akismet to reduce spam. Learn how your comment data is processed.