The next installment of April’s journal is ready, although not with everything I wanted to include because we were out of town for a while and now I’m catching up on things instead of doing new projects.

Her journal is here and there’s a (sort of) hidden project link to pierce your doll’s ears and make earring dangles!

I’m toying with the idea of hiding links to extra craft projects in the footnotes of her journal…want to help decide?

We have two winners in the heart contest, and some machine embroidery designs for you to download!  If you get started now, your dolls can have a new shirt before Valentine’s day!

The first was a flamingo by Joy and I was inspired by the bird on this:

http://www.target.com/p/our-generation-deluxe-18-doll-willow/-/A-17286085
to embroider the flamingo on contrasting felt and applique it.  This turns out to be a great strategy to get an embroidered motif onto stretch knits without the difficulties that sometimes arise when embroidering on knits.
Anna’s motif had a boho vibe that I loved!  I digitized it first in a color version to put on a white T-shirt, but playing around with color combinations I got inspired by traditionally embroidered Mexican blouses that use white thread on brightly colored fabric and Julika’s blouse was born.  Covering the yoke with lace is an easy and trendy way to add interest without embroidering.

(L – Kidz n Cats Julika, R – OG Jamie)
Mexican blouse pattern for all sizes is on etsy here
You can download the contest embroidery designs in .pes format here:
Flamingo: https://www.dropbox.com/s/2bul8ky6503zvtu/flamingo_final.pes?dl=0
Heart with flower: https://www.dropbox.com/s/ht97rlpva6s2nna/contest_heart_final.pes?dl=0
Please note that the flower-heart motif has a lot of threads to cut and is a dense design – not the individual density of the stitches, but how close the elements are together.  My machine shredded the top thread and made a few bird nests underneath, so use at your own risk and stabilize well!

Because April “asked” for one to keep, I also did a version of the OG heart logo which stitches out beautifully:
https://www.dropbox.com/s/s5hmqdq45qzvnyx/OG%20heart%20final.pes?dl=0
It’s been modified somewhat from the original, but is similar enough that you shouldn’t put it on things to sell.
Love Ten Ping?  I have good news!  The birthday fairy did not come through with Zuri 😦 but did bring Ten Ping a friend named Gigi and I’m hard at work on some sweet little spring patterns for her that I’m hoping will be ready by the end of March.
April’s next journal is coming out soon and might have some hidden surprises in it.  Stay tuned!
Standard

Who’s the bendiest of them all?  Surprise – it’s Barbie!

Around Christmas I was in Toys R Us and an overwhelmed grandma asked me if I knew anything about dolls.  Um…yeah, a bit 🙂  I tried pointing her to the fabulous Journey Girls, but her GD apparently was into Barbie, which I’m not.  I strolled down the Barbie aisle with her though and found a new one called “Made to Move”.  The price was right (about $15) and I bought one for research purposes, thinking there was no way it was as good as Obitsu.

I finally got around to doing a pose comparison this week, and I was shocked!  When compared to my bendiest dolls in that size range, Barbie is able to do more realistic yoga poses: 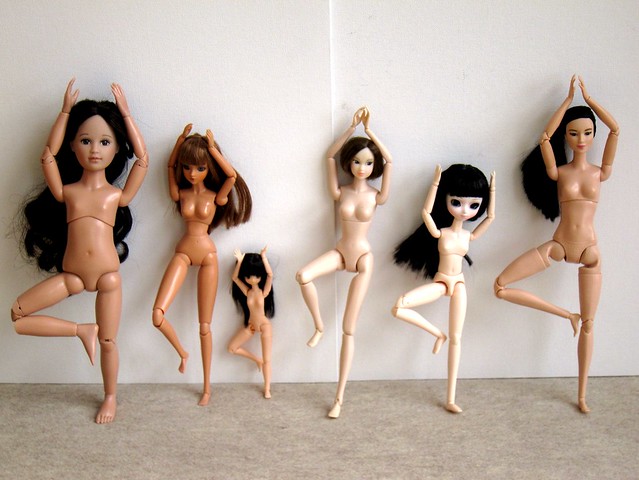 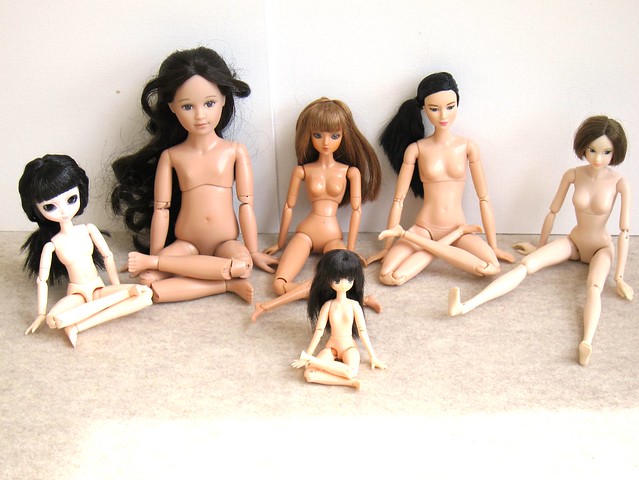 Can sit in an actual lotus position 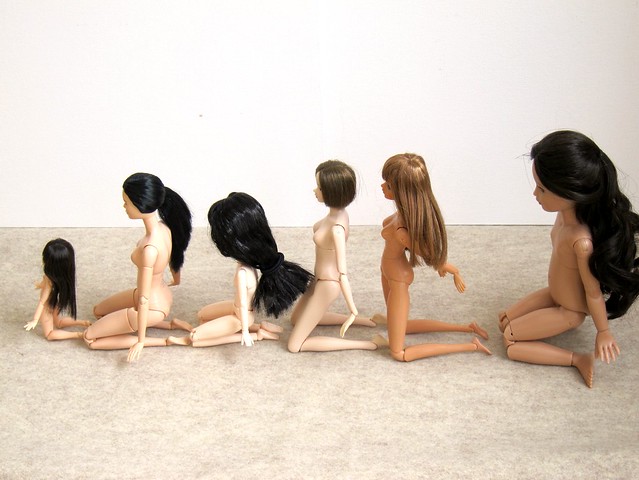 Yes, the Obitsu can do pretty much all these things too, but her body is floppy and arms are too short to do realistic arm-over-the-head poses.  There are a few more pix here  if you’re interested.

So, when I was asking for suggestions about April and which OG outfits you liked, Brandy asked for this as a Valentine’s dress:

I decided April and her mom and their friends have a Valentine’s tea and dress up for it.  More to come about it in her journal, but for now, here’s the

I’m digitizing results of the Valentine heart contest from last week and basing the winner on which design looks best when embroidered.  It’s taking a while so I will post the winner next week.

The computer-generated images were fine, but please be aware that if you scanned your drawing as grayscale (L) instead of black and white, it shows up like the pic on the right when I convert it to B&W and it can’t be used.

Also, if you did scan as B&W but drew with pencil, sometimes it got grainy when it scanned and can’t be used without a ton of editing or re-drawing.

If you’d like to re-scan and re-send your drawings in the next day or two, you can.  Thanks to everyone who entered!