As I learned from my New Year’s stats, many people from Ravelry find their way to this blog.  So I’m going to assume there’s a sizeable percentage of you that know how to knit/crochet.  What about felting?

There’s something kind of magical about felting, where a loose mass of wool becomes a firm 3-D object.  I was an avid needle-felter for a while, but my adventures with wet-felting raw wool were usually terrible, and I rarely have success with any of those knitting/weaving projects whose directions end with, “and now just toss it in the washing machine with some jeans and wait for the felting magic to happen!”

This, on the other hand, is a really easy and fun project, as well as a great way to use up little leftover bits of yarn.  If you have some gauge swatches gathering dust, this could be a great use for them too!

Even if you are the world’s second slowest knitter (I’m the slowest) 🙂 you can probably make these cozy felted doll slippers in an afternoon.  And best of all, the size is easily adaptable to many different sizes of dolls!

In case you were anxious to find out if I did get a new Maplelea, the answer is yes!  I’ll let you wait to find out who it was, just like I had to wait, but she’s very cute!  🙂  After spending so much time on the Ten Ping outfits, it’s quite different to suddenly switch back to a “very large” doll, and some of you will be thrilled to know more 18″ doll projects are on the way for her over the next couple of weeks!

Thank you to everyone who entered the tiny doll sewing challenge!  There were around 30 entries (see some of them here) and I’m not good at making decisions, so thankfully my mom agreed to choose the winning entry!

My mom chose Barb’s as the “absolute cutest” saying, “It just jumped off the screen!”.  Things seem to jump at her all the time, like yarn that “just jumped out and said, ‘buy me!’ ” 🙂

Unfortunately,  the pic of the winning dress wouldn’t paste, so here’s the link: https://flic.kr/p/qP9cxL

The use of two coordinated prints, and adding a third color in the buttons and rickrack tied this all together, and the bandana helped give it a “garden” feel

I was basing the judging on uniqueness and creativity, and would like to share some other fabulous ideas in the entries:

A similar idea to Barb’s was this one:

Esyram added an applique on the skirt, and a border along the bottom that looks like a separate skirt. She did a really nice job positioning the flowers on the straps to look like buttons too! 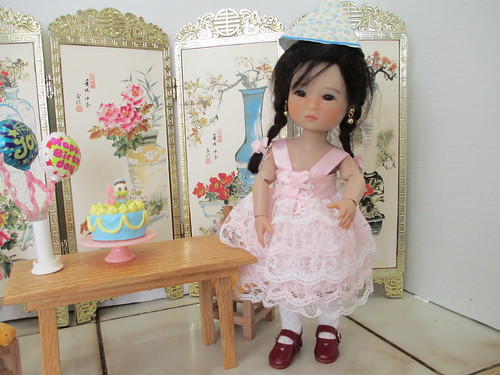 Little girls LOVE ruffled dresses, and Pauline’s dress, along with the way this picture was set up told a story of a little girl who felt as beautiful as a princess in her new birthday dress!

There aren’t a lot of dresses that look equally pretty in front and back, but Lynda’s was an exception.  The tiny buttons and roses were an extra special touch. 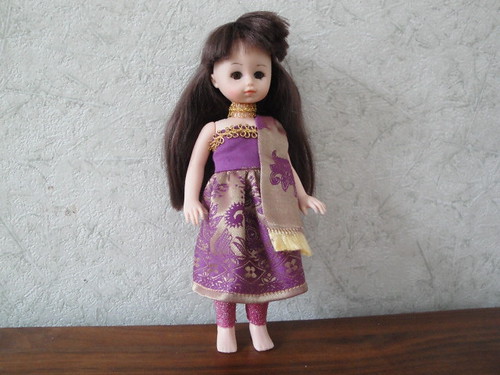 I like this outfit for the creative use of fabric and trim to give it an ethnic feel.  Also I like the doll! 🙂 I spent many happy hours playing with these “Skinny Ginnys” of the early 1980s.  They were my Barbie substitute, because my mom thought her unrealistic figure was inappropriate for a little girl to play with and refused to buy her for me. 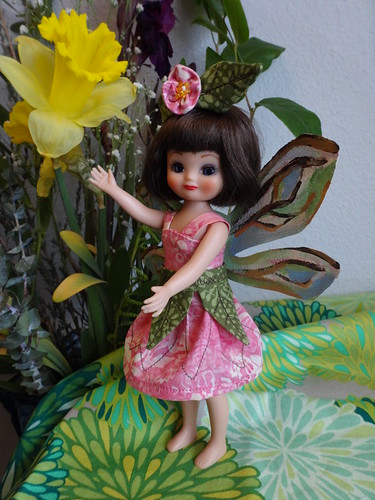 I love fairies…and I love tiny Betsy…and Anna combined them both!  I’m running to the sewing room now to make MY Betsy a fairy outfit too! (OK, actually I’m going to work, but if I didn’t have to work today, that’s what I’d be doing!)

As the “grand prize” winner, Barb will get all of the new Ten Ping patterns now available in my etsy shop here and here and here 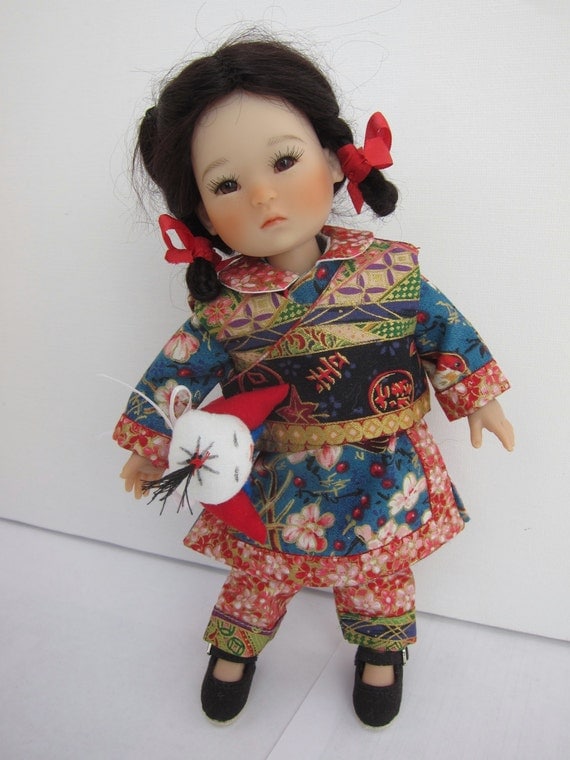 These ingenious little dolls are made from the simplest pattern imaginable, just a flat circle and rectangle that turn 3-D with a few stitches and some stuffing.  It would be very easy to scale them up as toys for larger dolls!

In Japan they are called O-sarukko, but the same style of doll is also popular in China, not necessarily as a plaything, but often decorating other things like pincushions.  If anyone knows what they’re called in China, please post a comment!

Just a reminder that you have until the end of this long weekend to get your entries in for the Tiny Doll Sewing Challenge!

**IMPORTANT**  If you’re entering the contest, make sure to put a link to your photo in your entry!  If you put something generic like “posted on my blog” or “on Flickr” I can’t see your photo!

I decided to release the new Ten Ping patterns next week at the same time the winner is announced, instead of today, as originally planned.  But they are just so cute, I couldn’t wait to at least share a few more “sneak peeks” of what you will be able to make with those patterns: 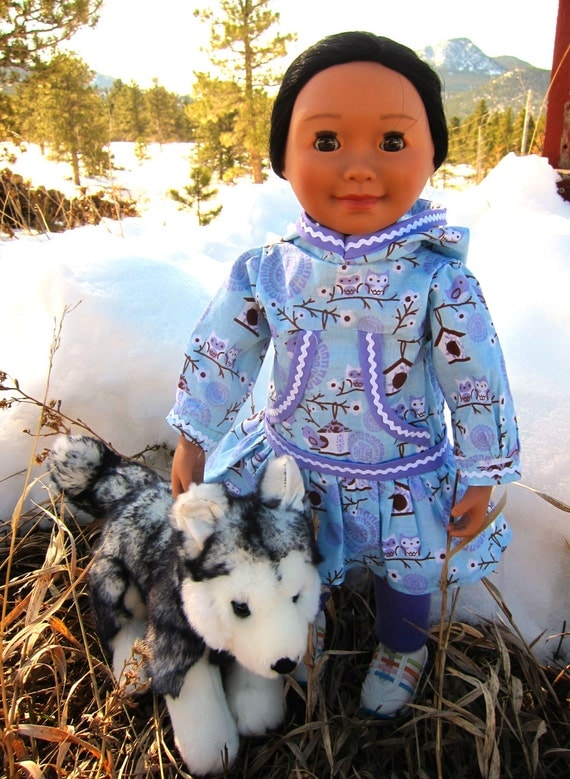 No, I’m not getting any compensation for this, and I stumbled on it by accident.  If you live in the US, guess where you can now get Maplelea dolls with free shipping?  Amazon!!  I don’t know if it will be a permanent thing, but as of today, they had a lot of clothes and shoes for similar prices to the Maplelea website, plus Saila, Leonie, Alexa, and a couple different friend dolls for US$100 with free shipping!  That’s pretty great, considering postage on just one doll shipped from Toronto to Colorado is US$28-$42 depending on the shipping method!  Right now, these three are in my cart and I have a bday coming up…stay tuned to see which (if any) of them actually make it to my house! (Images below from amazon.com where you can get these dolls)

Ok, and now for the Tiny Doll Sewing Challenge!

A lot of people feel intimidated by sewing for very small dolls, but in my opinion, if you have an appropriate style and pattern, it can be just as easy as sewing for an AG!  This project is no more difficult than sewing a cuff to a gathered sleeve for a bigger doll, and can be customized in numerous ways.  That’s where you come in:

Do something creative with this pattern 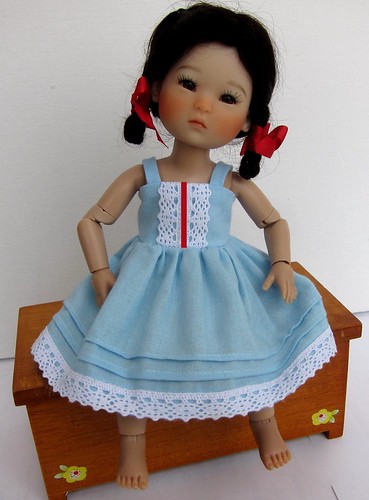 It was designed for Ten Ping, but any doll with a roughly 4″ chest can fit into this pattern, so go find a vintage Skipper/modern Ginny at a thrift store, they’ll both fit into it too!  Also Riley, Tiny Betsy McCall, Dal, 20cm BJDs, and probably a lot more I don’t know about!*  Add a little width to the back for vintage Ginny (she said, after making a dress and sending it to her mom for Christmas and finding out it was too small…)

Some theme ideas to start your brainstorming:

Is your outfit really awesome?  Like contest-winning awesome?  Enter to win the entire set of Ten Ping patterns coming next week!

You can see some of the dress patterns here, and there will also be a play clothes set and one called “Shanghai winter” based on my favorite Ten Ping outfit by Ruby Red.

To enter your dress in a contest to win 3 sets of patterns designed to fit 8” dolls like Ten Ping:

Contest entries get time stamped and must be in by midnight Jan. 19th, 2015.  Judging will be based on creativity and uniqueness.  Winner will be announced Jan. 23rd on the blog.

*This is meant to be a challenge to inspire you to sew for your poor, neglected,  itty bitty dolls that never get new clothes because they’re “difficult to sew for”.  If you really don’t have anyone that small, you can try copying the pattern at 137% and shortening skirt to fit 10″ Tonner dolls like Ann Estelle, Patsy, etc. Check the fit by wrapping the pattern around the doll before you sew it in good fabric!

UPDATE:  A lot of people have asked, so here’s a pic of how the dress fits a mini AG without alteration.  I’d suggest maybe shortening the bodice by about 1/4″ and overlapping the closure in back.  You may want to shorten the skirt, or leave it long for a dressier look.