When the weather is gray and all the colorful leaves have disappeared, it’s time to break out the bold colors for winter.

This is not just about a coat, but about seeing the “bones” of a pattern and using what you have in a different way.  Yep, you already have the pattern…it’s the felt coat from two weeks ago!

With a bit of ingenuity and totally different construction method, it turned into this puffy winter jacket: 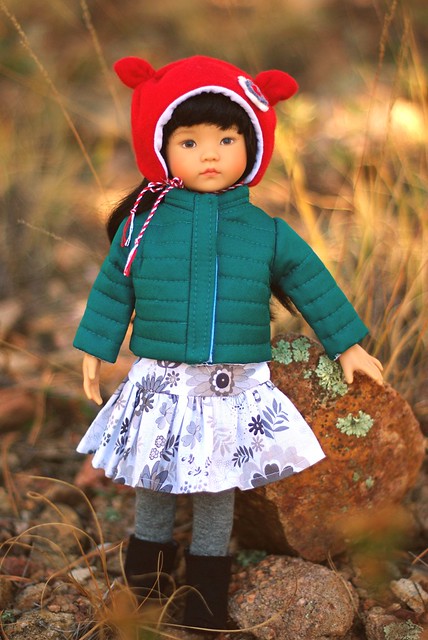 In pursuit of perfect piping, I’m taking next week off from blogging so I can focus on a project that’s been causing me more grief than I would have anticipated.  Then Little Darling will be doing some traveling to bring us a really fun set of posts full of sewing and crafting on a theme that should last us all the way to the New Year! 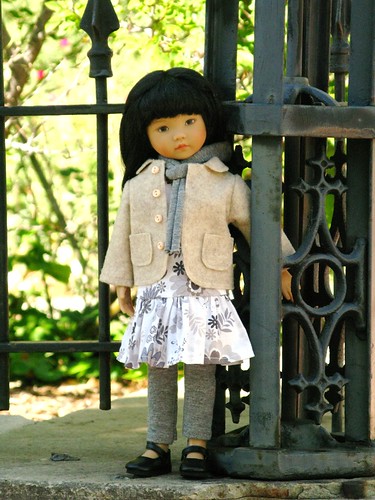 The colder it gets, the more layers we need…this week I added leggings and a scarf.  The leggings pattern here will fit Little Darlings/Cheries and can be lengthened for H4H.  For 16″-18″ dolls, there’s a tights pattern in the ballerina/ice skater set, the Maru pattern combo, and the Kidz n Cats fairy set.  (all available here) Just cut off to desired length to make leggings, which usually fall anywhere from just below the knee to ankle.  Stretch cotton  or fleece make perfect doll scarves because they don’t need hemming and usually drape nicely.  Cut a scrap from your leggings remnants or add some color with another fabric.

If you’d like an “indoor” look, it probably goes without saying that adding a long-sleeved T underneath also makes a sleeveless dress work for colder times too.  This pattern can be adapted to make a nicely fitted long-sleeved T (Missing AG sleeve is here)

I also did a T for Maru and Friends and forgot to ever post it here or put on etsy or something.  It would look nice under the A-line dress for them too! 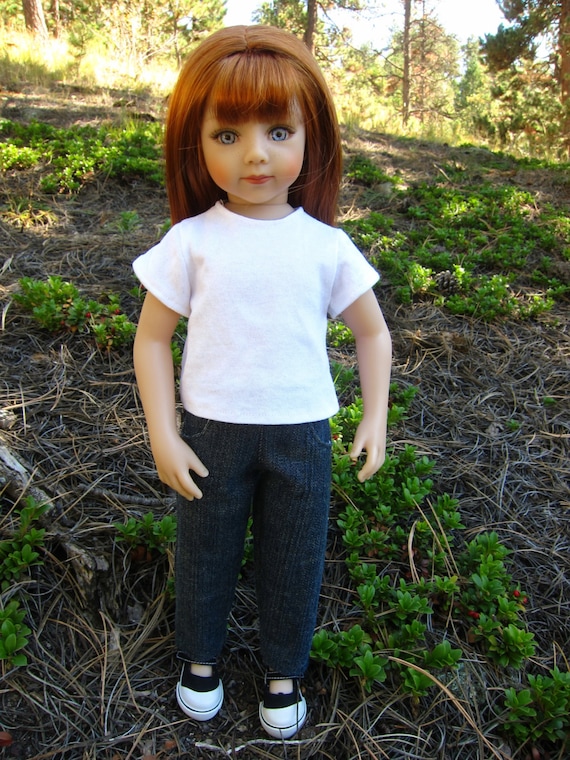 We’re going a little backward with the seasons this week with a felt jacket for spring, or any other season that needs some extra warmth, really.    It’s so easy, you can quickly make a few in different colors for each season.  Alternatively, make it in a neutral color and use the same jacket for all seasons.  This week’s pattern also includes instructions to give it a springy touch with a rickrack flower pin that would also look nice on a hat or headband. 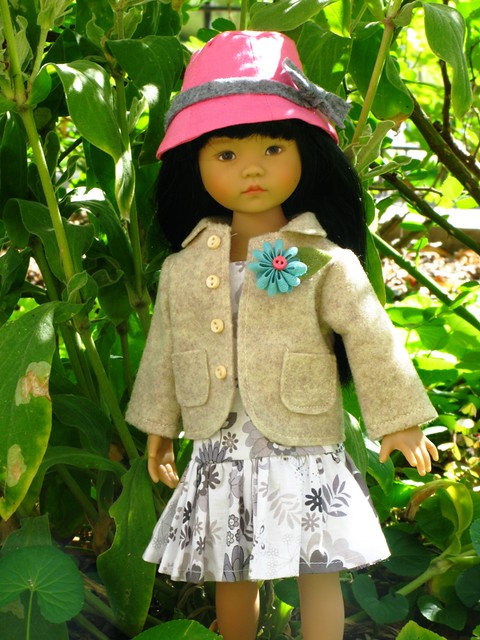 The jacket came from a modified version of this one:

Free pattern for an easy felt coat for maru

You know how with your craft projects things don’t always go as planned?

The beginning of this outfit was me trying to digitize a very simple, quick little flower as machine embroidery to decorate the felt jacket.  Circles are about as easy as it gets, and I quickly made a few little circular flowers and arranged them in a pleasing way.  Then it came time to choose the colors… pastels for spring?  While that would’ve been the logical choice to go with the rest of this post, all the beautiful autumn colors outside my window were irresistible.  And then while I was working on it, someone sent me this pin: http://www.pinterest.com/pin/241364861255359480/ and my few simple flowers on a jacket turned into an embroidered vest and a skirt border, and eventually became this harvest outfit.

Blouse and skirt from the European folk costume pattern copied at 77%.  Also check out this post for the same outfit with different embroidery and a downloadable machine embroidery file for a vest.

Even though I’m a doll collector, and your etsy purchases help support my “habit”, I never in a million years thought I’d have a Little Darling.  A while back, DH walked past the computer, where I was looking at some pix of them and said, “Wow, those are pretty, why haven’t you ever asked for one of those?”  When I explained the cost ($375+) and wait time to obtain one of these amazing, hand-painted dolls (6-15 months) he closed his mouth and quickly walked away.   I do most of my doll pictures outdoors, and more times than I care to remember, they’ve slid off logs, tried to “fly” out of trees with their little fairy wings on, or just done a flat-out face plant in the dirt.  With most dolls, you can bring them inside, wash them off, and do the occasional steel-wool “repair” of a shiny spot.  But there’s no way on earth I’d take such a special doll outside!  And really, why buy it to have it sit in a box gathering dust?  So I stuck to less expensive and second-hand dolls and just admired other peoples’ pix of the Little Darlings.

Well, it turns out the souvenir doll for this year at the UFDC convention was none other than…

But no, I didn’t go to the convention, and the dolls were selling on ebay for insane prices last I checked.  So, cross that off my list too.  And THEN I was at a doll show…and I saw one…for an absolutely amazing price.  Had I been there on my own, I wouldn’t have done it, because it was my entire budget and I hated to spend it all at once on just one doll, but DH   ran back to get it when we saw the same doll two tables away for twice the price.

And now comes the question you knew I’d be answering…What will fit Little Darlings?

Thankfully, she [who-has-not-yet-been-named] LOVES to share!  The pink dress above was made many years ago for  my 14″ Betsy McCall from one of the Rosemary Ionker books.  She tried on all of the summer sew-along dresses from this year and they look GREAT on her.  The pic below shows her with some other similar-size dolls. 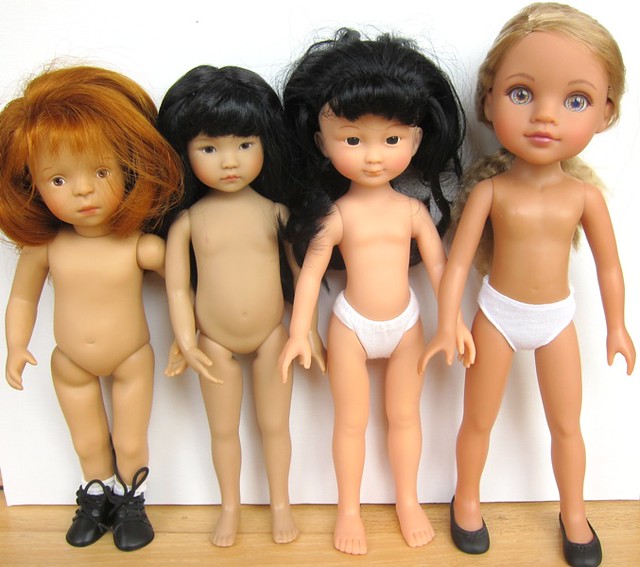 Her torso is most like the Natterer Minouche (L) but legs are more like Cheries (second from right)  With length adjustments, she can wear Hearts for Hearts patterns easily, which also means most of the Sasha patterns work at 77%, shortening long sleeves and skirts a little . 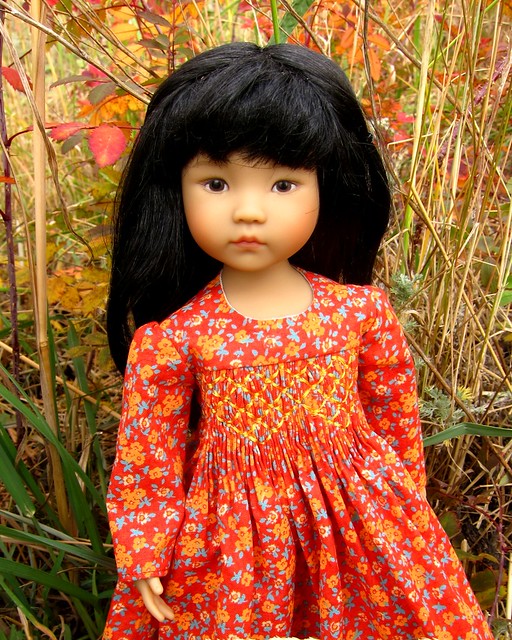 These dolls look perfect in classic kids’ clothes, and as you can see she fits into the H4H size smocked dress pattern available here with long sleeves shortened by about 1/4″ (5-6mm).

Remember the survey back in the summer? Lots of you said, “More modern stuff” as well as “more separates to combine”.

The other day, I took one modern separate
https://jenwrenne.files.wordpress.com/2012/08/free-pattern-for-august-heirloom-sundress.pdf

and resized it for my smaller doll by copying the original at 77%.  This will also work for other 13″-14″ dolls like Hearts for Hearts/Cheries/etc.  Note that the button bands become too small to be usable at that size, so you can eliminate them and add a little to the back if you want an overlapping closure. 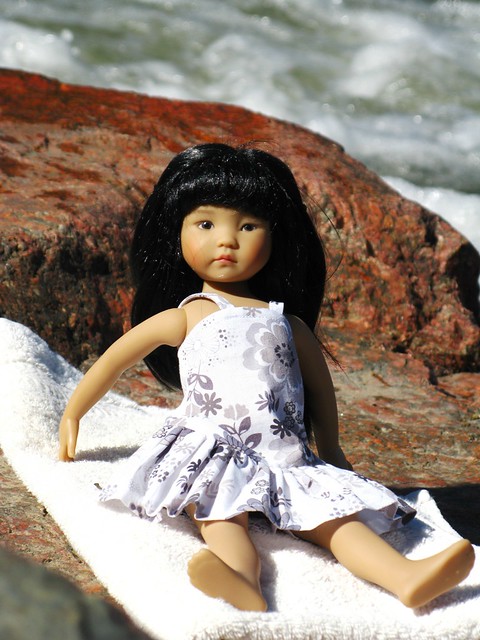 But it’s only a summer dress, right? Wrong! Over the next few weeks I’ll show you how I added different pieces and accessories to turn it into a 4-season dress. This will work with any sleeveless dress, or even a short sleeve dress with tight sleeves like the T-shirt dress from last week, so you may be able to save yourself some work and use that or something you did during the summer sew-along.  If you’re making something specifically for this, my suggestion would be to make it in a neutral or muted-color print/dots/stripes so you have more options when it comes to accessories.

OK, so make a dress of your choice for your favorite doll, and your accessory for it this week (summer) is a sun hat.  Pic of hat is in the pattern.  I intended her to be wearing it, but it was incredibly windy the day we took these pix and I feared it would end up in the water as the towel did as soon as I removed the doll from it! 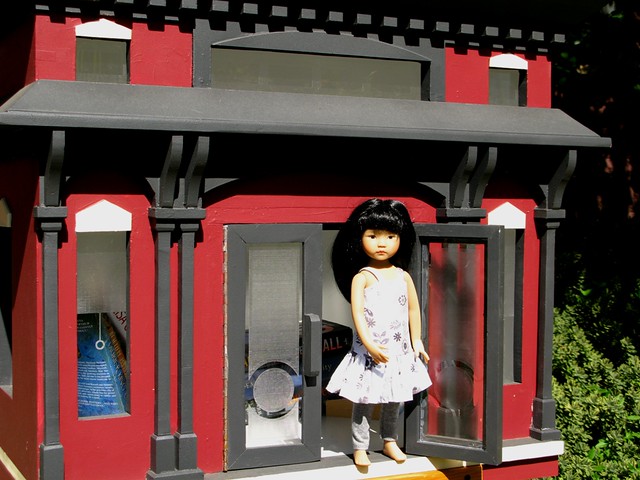 Just had to share this adorable pic.  You may have seen boxes around your neighborhood called “little free library” and anyone can add to it or take books from it.  There are a lot of them around where I work, but they are mostly just plain, painted wooden boxes on poles.  When we saw this one in Denver last weekend outside the Byers-Evans House Museum, I dragged DH over to take pix, even though the lighting was less than ideal.  Hmm, maybe there are plans for this somewhere and I can make my own with taller doors…?  Right after this pic was snapped, a gust of wind came and the doll flew to the sidewalk below before I could catch her.  I have no explanation for how it could have happened, but she threw her arms up and landed on the sidewalk on her hands and feet, kind of in a crawling position, miraculously protecting her face.

Apologies for unanswered comments…I am reading them but this time of year is SO busy for me I can barely keep up with the paperwork I’m officially being paid to do! 🙂

It might feel like a long time to you, but to me, September was a whirlwind of sewing and patternmaking and I’m amazed this all got done in about a month!  You’ll recall I was inspired by modern kids clothes and it was lots of fun translating already-adorable kids clothes into even more adorable doll clothes!

In the interests of having more than one model, and hoping to have some interactive 2-doll pix, I added Savannah to our doll family…not a fun process.  But if you already have one and want to sew for her a link to all the new patterns is here and scroll down for a FREE pattern too!

They’re available individually and in sets of 2-3 here and I also put all of them together in one bundle that saves you $11 over buying them individually.  It’s listed here.

I’m always excited when dolls can share clothes!  Remember how I said when I got Tanya I was upset that I couldn’t scale patterns up or down from any other doll to fit her?  Well, I recently got a Paola Reina Las Amigas Cristi doll and was thrilled to find many of the Maru patterns I’d been drafting work when copied at 60% for her!  This is great news, because the PRs are smaller than Hearts for Hearts, and now I don’t need to start from scratch to clothe her!  (size comparison pic here: https://flic.kr/p/pjDNJa)

Who else can share clothes with Maru?  Well, you’ll be happy to hear Journey Girls can share a lot of patterns.  As a rough guideline, you can adapt many of the Maru patterns to fit the JGs like this:

Check out this cute, easy and FREE dress pattern:

What have you been up to?

I love seeing your creations and inspirations from my patterns!  You’re always welcome to send me links to your pix or blog posts showing what you’ve done.  Katy did a blog post about the summer sew-along here: http://1960sgirl.wordpress.com/2014/09/13/wrenfeathers-summer-sew-along-2014/  Her pic of Shola illustrates that the right fabric can be decoration enough…and that maybe I need to take a trip “across the pond” to stock up on some Liberty fabrics 🙂

Speaking of other websites you might enjoy, check out this free printable for a cute little pop-up book that seems to be a nice size for 18″ and larger dolls: