Yay!  Summer break is only a few days away!  🙂  Now’s your chance to tell me how to spend my vacation (AKA what you want to see on the blog)

There’s a survey here: https://www.surveymonkey.com/s/F7LBKNT so you can tell me completely anonymously what kind of dolls and sewing/crafting projects you’d like to see.  You can always post comments/email me too!  The survey will be open for a week and then the results will appear here.  (It’s only 6 questions…go do it now, I’ll wait…)

Ok, are you back?  🙂  No doll shoe school this week…I was going to do lasted shoes and  people shoes got in the way.

I made these by adapting this pattern:  http://www.behance.net/gallery/UNifold/8494751 to be wider at the ball of the foot, roomier in the toe and taller in front.  Although they’re far from perfect, I’m pretty proud of them 🙂  (and yes, that little clamp will get replaced with velcro or something before I wear them LOL)

This would be a totally do-able sandal for dolls with human-shaped feet, like Hearts for Hearts, but would require a lot of adaptation to fit feet like AGs.  How did I make the lasts?  Glad you asked.  I used a pair of birkenstock clogs that had been chewed by a dog, (the dog part isn’t strictly necessary, it just makes it easier to pick which shoes to use, since they’ll be destroyed in the process) taped up the chewed part and used cardboard to make a form to cover the back and go up a little higher.  I filled it with drywall compound, which is similar to but cheaper than plaster, let dry and cut away the shoe.  Obviously, that technique can be used to make lasts for doll shoes too!  For AGs,  get a cheap pair of shoes like the ones sold by Springfield dolls (at Michael’s, JoAnn, etc.)  Smooth shoes like ballet flats are better than lace-up styles.

The next summer thing in the works is going to be a sew-along…and it’s different than the last one, because you’ll be held accountable!  You can get the next pattern free every week ONLY by posting a photo proving you made the previous week’s outfit (or you will also be able to buy the whole collection at once on etsy)  It’s going to focus on the “little girls” (13″-14″ like Cheries/H4H) since they were neglected last year.

So join the flickr group if you haven’t yet and start shopping for a package of fat quarters to get ready!  Yes, you also have my permission to buy a smaller doll (Cheries, Hearts for Hearts, Paola Reina, Minouche) if you don’t already have one.  🙂

Hearts for Hearts  are available at Target, Amazon, some Barnes & Noble stores.  They are a fabulous company who donate part of their profits to help kids in developing countries.

Paola Reina now has a North America website (based in Canada)

Cheries are widely available on Amazon and specialty/upscale toy stores

The sew-along should be starting next week.

The flickr group is now open to anyone instead of invitation only, as it was last summer.  There are lots of cute pix and great ideas from last year’s sew-along.  If you’re new to the blog, those patterns are here:

Doll’s top is from https://jenwrenne.files.wordpress.com/2013/12/mix-match-week-1.pdf

Doll in pic is a Marie Kruse Stylista

This week we’re doing a classic shoe – Mary Janes.  These are a little harder to line up the upper and sole than last week’s and have straps and closures.

Remember how I said this shoemaking endeavor started with people shoes? So what you’ll find HERE is a pattern and all the instructions you’ll need to complete a simple, turned, women’s size US9/EU 40 shoe or slipper if you’d prefer.

A doll version of the pattern is included also, but the straps are set back a little so the strap falls more over the ankle. I find for doll size that helps them stay on better than having the strap at the instep, but if you eliminate that point and curve you can also turn this into ballet flats.  Sorry there are no pix of the doll version, I made them all in flannel to check fit but they weren’t as cute as the bird ones 🙂

You might want to wait until next week to see an easier way to do this for Hearts for Hearts/Cheries.

Here’s what we’re making this week:

Her top is available free here and pants are coming as soon as shoe school is over!

So, it’s kind of a long story why, but I’ve started making shoes.  No, not for dolls, for me.  But I’m learning a lot in the process, and it’s certainly applicable to doll shoes, so I thought it would be nice to share and help you either start or improve your doll shoemaking skills.
Not covered:
Sandals: For doll size, you just cut two pieces of craft foam to fit her foot, then find some ribbon to use for straps. Tape the first sole onto the doll’s foot, arrange ribbons as desired and glue to bottom of first sole, the glue on the second sole, sandwiching the raw edges of ribbon in between.
Moccasins can be found here: https://jenwrenne.files.wordpress.com/2013/08/tlingit.pdf

For the next few weeks, I’ll be posting “Shoe School” which will likely include:
• Turnshoes (medieval and modern)
• Out-stitched shoes
• Lasted shoes

These will be posted in order of complexity, so you can follow along and learn something new every week!

Putting sandals and moccasins aside for the moment to focus on closed-style only, there are three basic ways a shoe gets made, and they fall into the categories of “innies” and “outies.” The first kind of “innies” are some of the oldest European footwear we know about, recovered from Scandinavian bogs and Medieval excavations. They’re called “turnshoes” and refer to the way they are constructed, by sewing all the seams and turning them right side out. I would say the majority of doll shoe patterns available commercially these days involve this kind of construction. It works great with materials like felt, fabric, and thin, flexible leather or leather substitutes.
This is a modern reproduction of a 10th C shoe from http://leatherhelms.com

It shows the unique triangular back found on many shoes from that period, and interesting (but not necessarily authentic) closure. Many shoes of this type were constructed with really ingenious leather “buttons” like this:

From the Barefoot Cordwainer on etsy.

And what does the doll version look like?  Well, I used wool felt, and then couldn’t just let the shoes stand on their own, noooo, I had to make a whole Viking costume to go with them! 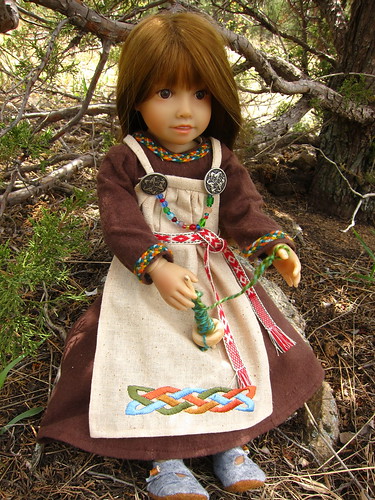